Installing a Dynamo Regulator DVR2 on a 1969 Velocette Venom MKII

After getting the duff magneto back into shape, the running Venom proved that the charging system still had not improved while it had some time to rest. A quick inspection of the brushes showed that the problem might be elsewhere. Connecting the 'D' terminal via a jumper to a battery and grounding the body ran the generator like a basic motor. Ok, must be the regulator then. To the rescue, Ed Gilkison popped a Dynamo Regulators DVR2 into the mail last week. The DVR2 can be run either as a 6 volt system or a 12 Volt system by either using or omitting a white wire. If you connect the white to the unit's brown wire the DVR2 runs as a 6 volt system. Since its so easy to convert from 12 volts to 6 volts I'll be running it as a 6 volt system and leave the white wire with an access point for later conversion to 12 volt. No real reason to not go 12 volt but all the bulbs and battery are new and ready for 6 volts! 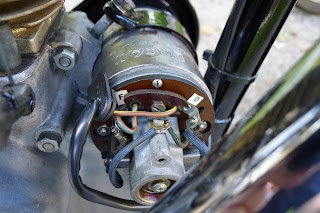 The 1969 Velocette Venom clubman MKII hides its Lucas RB108 regulator on the fender under the seat. Not an easy place to get on this particular machine but not too terrible either. 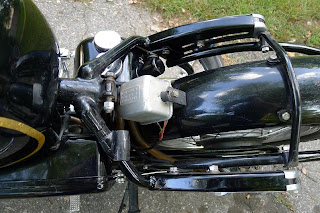 After removing the unit I opened it to give a visual inspection. It needed to be opened anyways as the new regulator unit would be installed in the old case keeping with the stock look. With a sharp screw driver you can lever off the case and get to the internals easy enough. Seems that Lucas used a compression type of connector for the wires. Having never worked with them they looked to to be reusable, though might not be the best system out there. 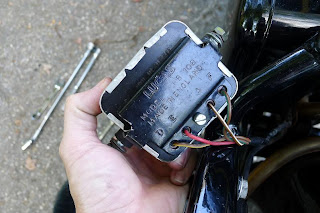 Here is the RB108 regulator all opened up. On the side you can see the compression connectors, rubber seal and hold down plate. 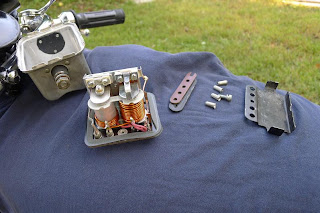 A detailed picture of the relay connections on the regulator. 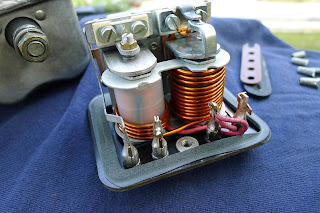 A quick study of the wires on the DVR2 regulator and how it might hook to the terminal post that Lucas uses. 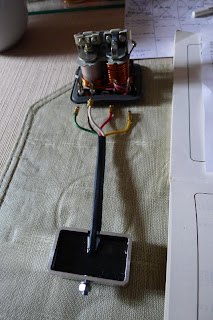 I'll cut the wires back somewhat then solder to the terminal posts. Just a note for anyone doing the same idea, it might void your warranty. Call or e-mail Dynamo Regulators first. If needed, you can use the pictures from the blog of send them a link so see if they might frown on this way of installing. 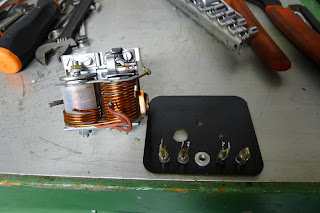 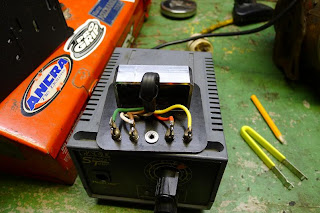 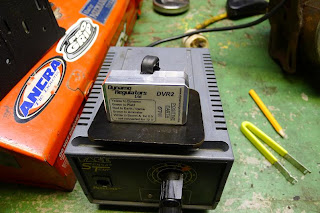 Here is a picture of the finished unit all crimped, looks stock. You can see the white wire looped for easy access at a later time. Cutting this wire will enable the 12 volt feature. I'll need to shrink wrap the end of the wire so it will have to come off the bike but I won't have to un-crimp the case. The white wire will be covered with the connector clamping plate. 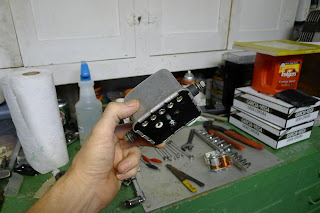 A shot of the modified unit installed on the bike, looks stock enough for me. I'll give it a through test tomorrow when I have more time. Real easy install so I've got good feelings about this unit. 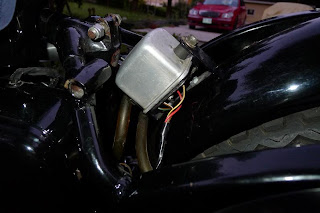 Posted by Rhynchocephalian at 7:59 PM